Showing posts from January, 2015
Show all 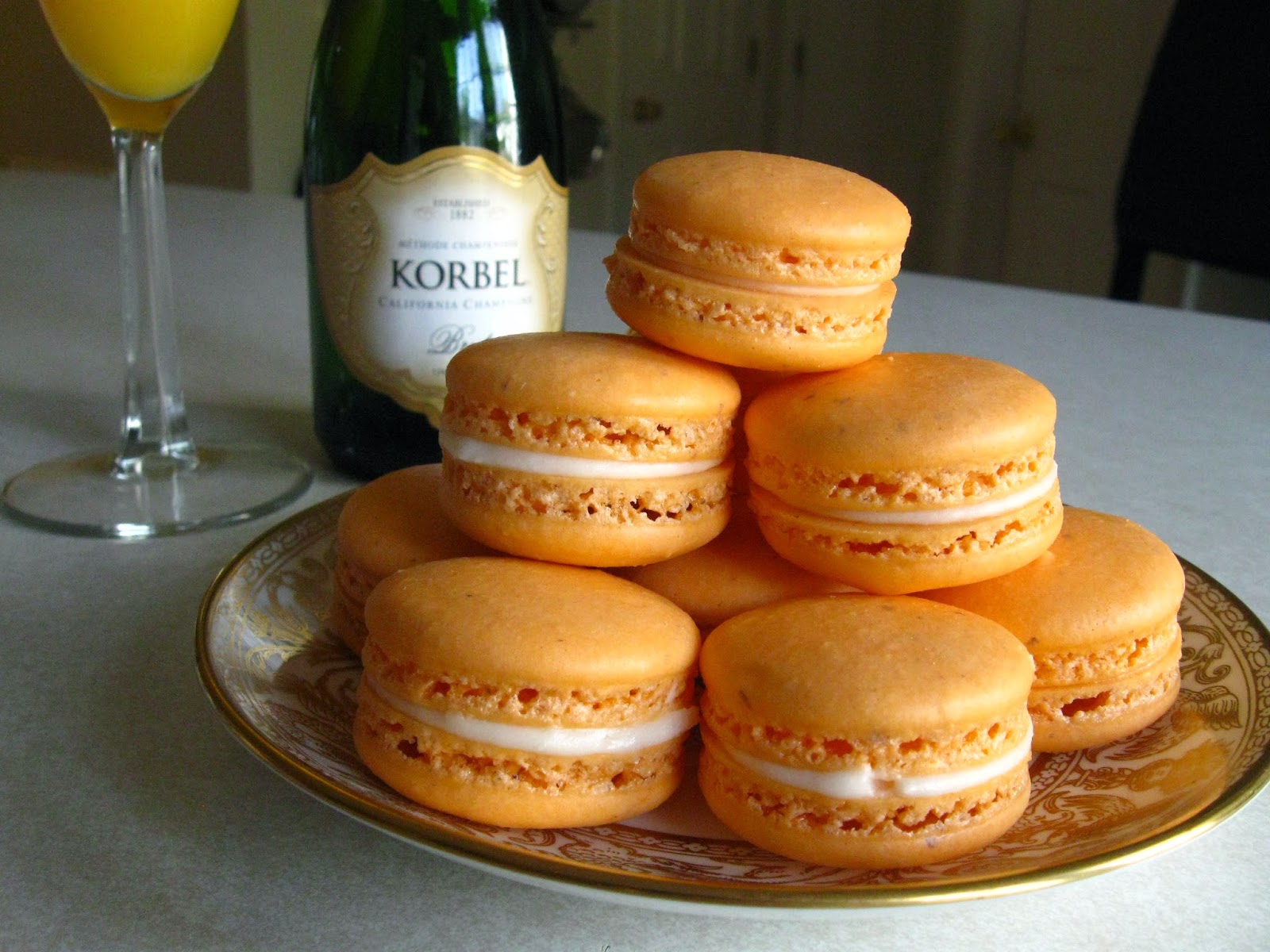 Buck's Fizz Macarons (Gluten Free, Dairy Free) Buck’s Fizz was first served in 1921 at the London Buck’s Club, a gentlemen’s club that partially inspired P.G. Wodehouse’s fictional Drones Club. Credited to a bartender named McGarry, Buck’s Fizz has remained popular for nearly a century, and is typically made with two parts orange juice to one part champagne, although the true recipe remains known only to the club.  This has to be the best cocktail to have with breakfast (or brunch, if you prefer), and I like it because the champagne nicely tempers the sweetness of the orange juice. I tried to recreate that taste in macaron form, and the result is subtle, very tasty, and not unlike an orange creamsicle.  So pop open some champagne, put on some David Bowie, and let’s get baking!  Ingredients For the Shells: ⅔ cup almonds 1 cup powdered sugar 2 egg whites (aged) 1 1/2 tsp orange extract a little orange gel food coloring For the Champagne "Butter" Cre
Post a Comment
Read more

Romance Has a Heart Hey everybody! You are going to start seeing me talk about this Romance Has a Heart thing quite a lot throughout the month of February, so I thought I'd try to explain it in more detail here! Me and Tracey Gee from LOVExtra have started this to raise money for the Canadian Heart & Stroke Foundation and the American Heart Association . For #RHAH , I'm Captain America (!) and I'm looking for romance writers, bloggers, fans, and any other wonderful people who would like to get involved to join my team!  So, what is it and what does it involve? To join my team, visit the team page on The American Heart Association and sign up as a member ! It costs nothing to join, and we'll put you on the fundraiser's website as a supporter, all we ask is that you help us to spread the word to the best of your ability. Join today - your captain needs you! If you'd rather help out by donating prizes, we'd love to hear from you! Message me here or contact us on our
1 comment
Read more

The Life and Death of Claude Duval 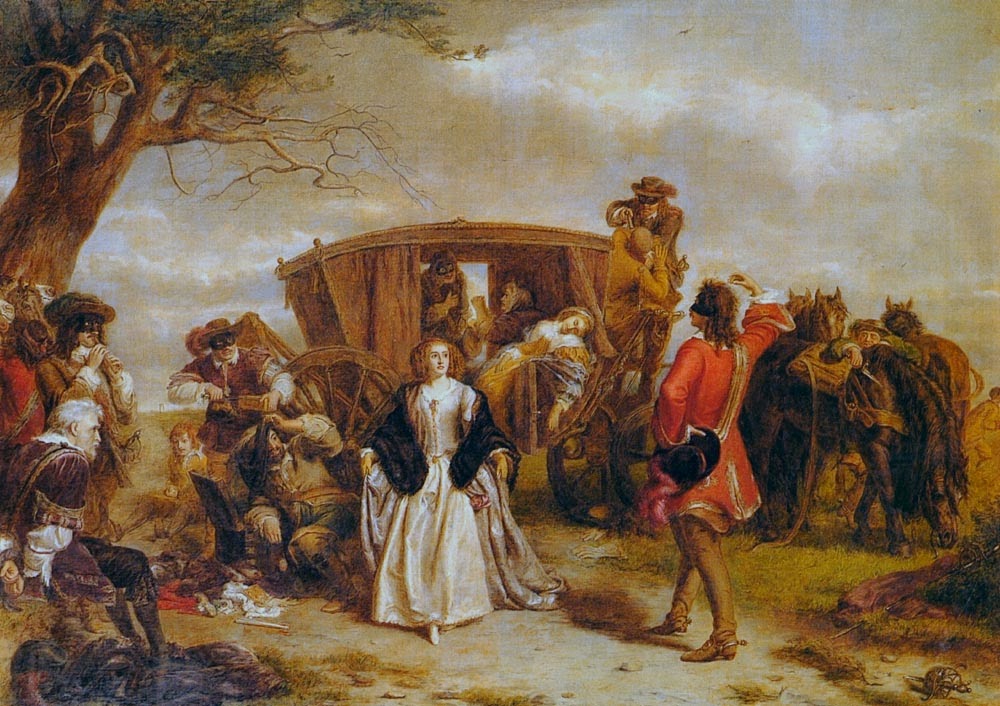 Claude Du Val . William Powell Frith, 1860. Claude Duval (1643 - January 21st, 1670) Claude Duval (Du Vall, Duvall, Du Vail) was executed at Tyburn on this day in 1670. Although he is only in my novel, Tyburn , for a very short time, he has a huge effect on my heroine, Sally, a fictional childhood friend of his from Normandy. Most of the details of his appearances in Tyburn are fictional with little bits of truth slipped in. The fact of the matter is, what we know about the historical Claude Duval is mostly limited to stories told after his death. Because so little is known for certain, we have to piece together stories to try to get a picture of the man behind legend. So where do we start?  Claude Duval was born in Domfront, Normandy in 1643 to a miller and the daughter of a tailor. In his Lives of the Highwaymen (1734), Captain C. Johnson writes that Domfront “was a place by no means unlikely to have produced our adventurer. Indeed, it appears that common honesty was a m
Post a Comment
Read more 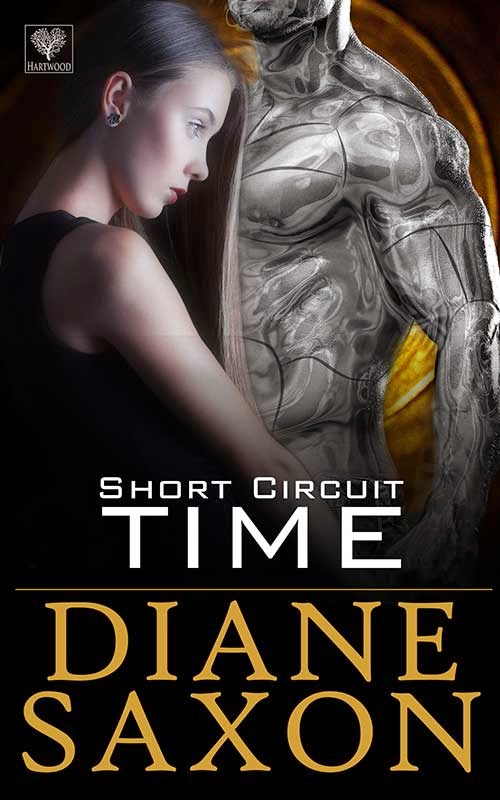 Today I am delighted to be hosting author Diane Saxon with an excerpt from her new release, Short Circuit Time . I think it sounds brilliant and I love the cover. Isn't it awesome?  Short Circuit Time by Diane Saxon      In the year 2086, Zaphira is alone, the last survivor of biological warfare on Earth. Before he died, her scientist father promised other survivors would come. Nobody has. So when a horribly mangled android shows up claiming to be her father’s assistant, Aiden, who has been sent through time to rescue her, she’s both frightened and astounded.      The last time she’d seen Aiden, she’d been sixteen, head-over-heels in love with him and had literally thrown herself at him, leaving her devastated by his rejection and him running for the hills. The following day, she’d been told of his death.      Eight years later he’s miraculously back, this time asking for her help. Without it, he won’t survive. But can she really put a dead man back together with tweezer
Post a Comment
Read more

Of Cakes and Kings (With their Heads on or Otherwise...) 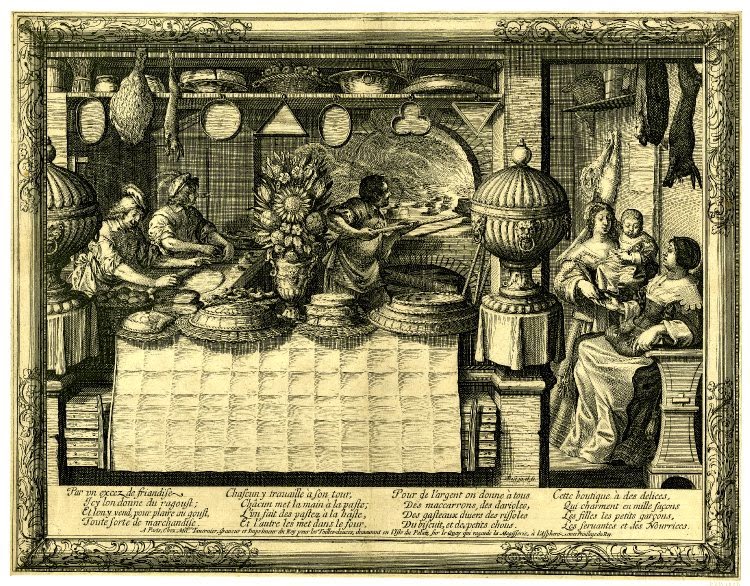 Guest post by Hannah Methwell Bosse. The Pastry Shop , 1632 Now I am a somewhat bloody-minded historical novelist. I write about a rather ruffianly troop of Oliver Cromwell's cavalry, all very rough and manly, and they spend a deal of their fictional career engaged in violent mayhem.  Which is all very well, but when not smiting the heathen hip and thigh, what would an Ironside officer, circa 1642, do with himself at home?  In the case of Captain Holofernes Babbitt, the answer is - hang around the kitchen hoping for cake. Known for it. Every time his good lady appears in those books, she's either trying to feed him, or fatten up somebody else in his troop. Het Babbitt is a lady after my own heart.  But what? Parliamentarians? Puritans ? With cake ?  Cakes. Custard tarts. Fruit pies. Biscuits. Cheesecake. You betcha.  Cake in the seventeenth century did not, on the whole, come as a snack, but rather, as part of a course at dinner in which multiple dishes would be
Post a Comment
Read more 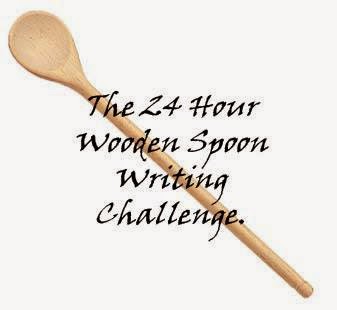 I accepted the Wooden Spoon Challenge from my friend, Tracey Gee. Tracey challenged me to write a historical short story under 2,000 words that also involved a wooden spoon and a turtle. Because I’m a brat, I also incorporated the two other elements from Tracey’s challenge into mine: daffodils and sci-fi. What do you get when you ask Jess to write a sci-fi historical with daffodils in it?  It’s not exactly a Doctor Who fanfic, but let’s just say it exists within the same universe. Or the Doctor is crossing over into mine. Or something. It’s weirdly serious. Enjoy. :) Hope Copyright 2015 by Jessica Cale February, 1941 Seren waded through the wreckage of the city center, walking instinctively toward the hole in the ground that used to be Swansea Market.  The streets had only just cooled enough that they could be walked on again. Her mother should be at work by now, but the market was gone, and her stall with it. When Seren had left, her mother had been in their narr
3 comments
Read more 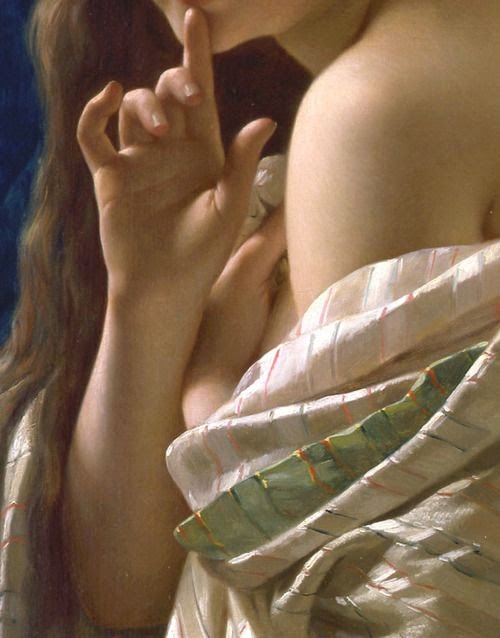 It is late one Wednesday night in 1671 and I am sitting in the Rose & Crown in Southwark with Lady Jane Ramsey.  She has just arrived from work and she looks tired. Only halfway through the week, and she’s already worked nearly thirty-six hours as a seamstress across the street. When we left her at the end of  Tyburn , she was wielding a poker in a gorgeous blue dress, and now she’s wielding needles in homespun. The difference is significant. I try to hide my surprise at her appearance as she downs her first glass of wine.  Thank you for taking the time to meet with me, Lady Jane. (Whispers, distressed) Don’t call me that here!  Oh, of course. Sorry! What do the people around here call you? Jane, is all. People tend not to ask questions here.  Do you mind if I ask you a few questions? Of course not. May I ask you one? Sure. (leans in) Why are we here? I have some news for you. I have written your story and it’s coming out in April. Surely not...the whole s
Post a Comment
Read more 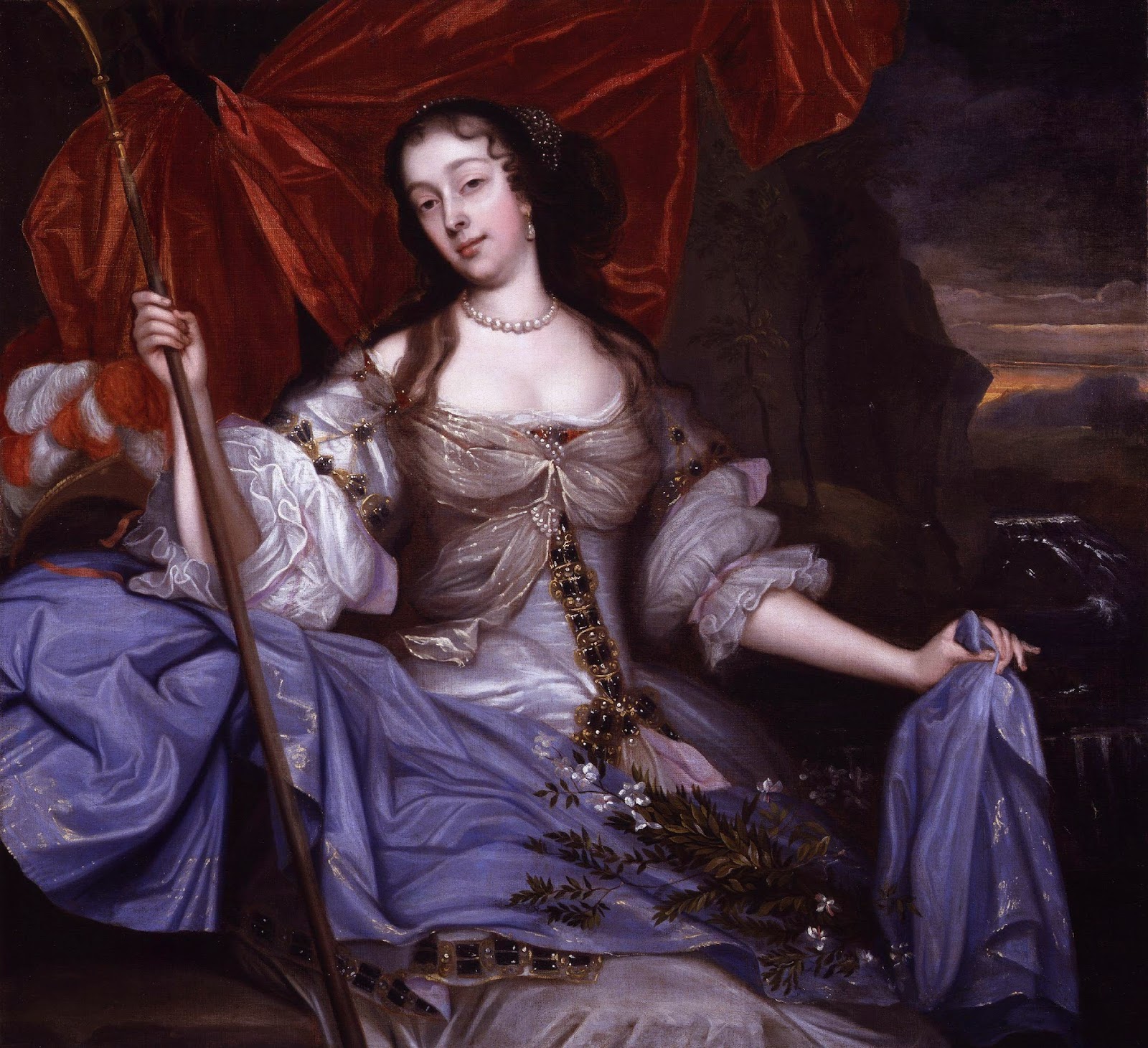 Welcome back!  January has turned out to be a rather busy month, with some fun guest posts and even more appearances coming up! In case you've missed anything, I have them here for you: Hoydens & Firebrands: The Price of Beauty in the 17th Century This is an especially fun post I wrote for the brilliant ladies over at Hoydens & Firebrands talking about the use of white lead in makeup in the seventeenth century. Ceruse appears in Tyburn , and this article tells you a little bit more about it (how it was made, what it was like to wear, how it could kill you, etc). There's also an interesting section on patches. If you, like me, are fascinated by the idea of getting lead poisoning through your face, pop on over to Hoydens & Firebrands ! Connie Bretes: Tyburn Excerpt I got to stop by Connie Brete's awesome blog with another excerpt from Tyburn. Check it out!  Coming This Month LOVExtra: Wednesday, January 14th I will be stopping by LOVExtra with an exce
Post a Comment
Read more
More posts