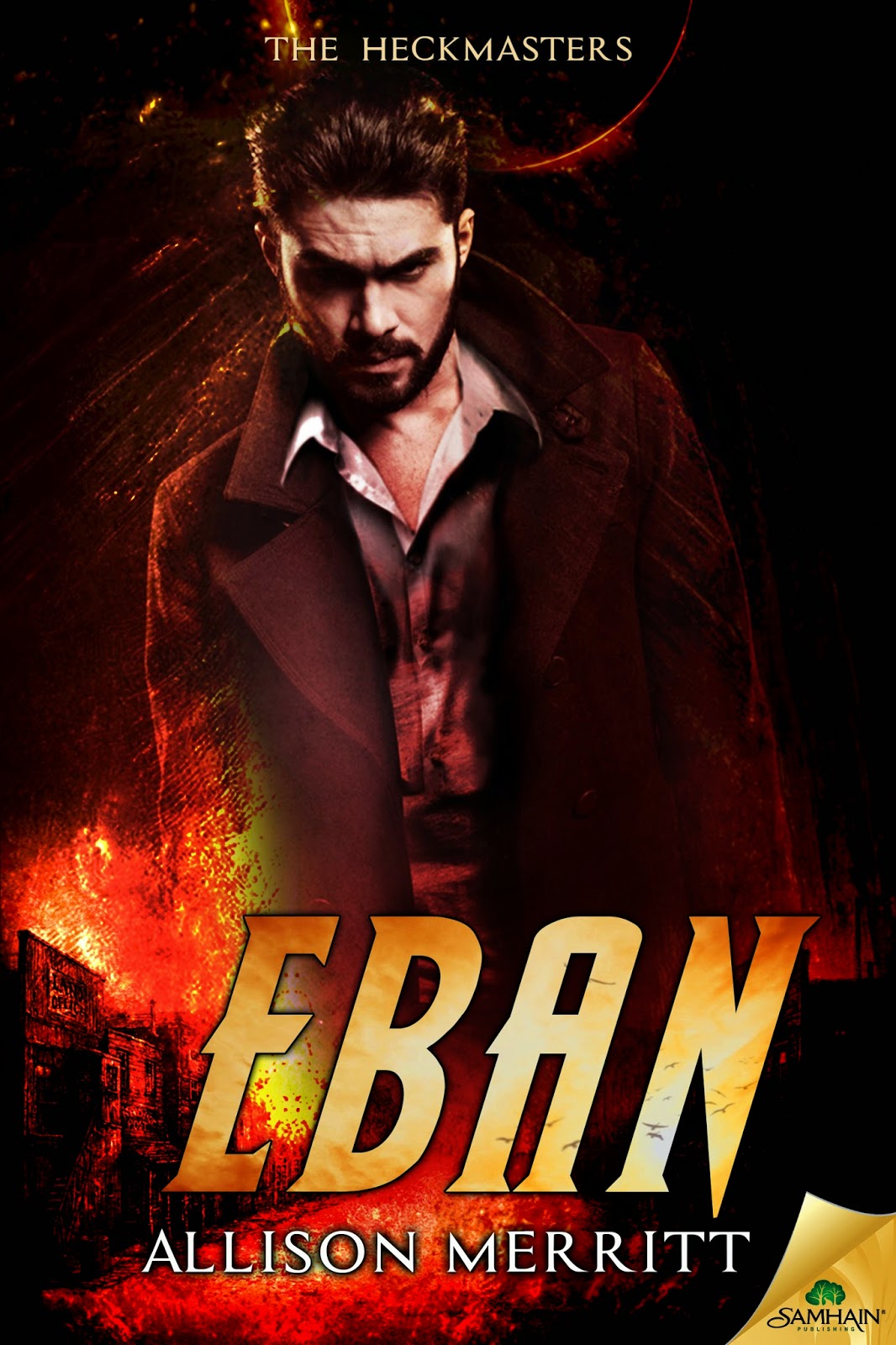 
If love can’t save them, there will be hell to pay.

Grateful for his mother’s human blood that cools the dark fire of his demon father, Eban Heckmaster has set up a medical practice in New Mexico territory. But there’s no hope of living a normal life until he rids himself of a seductive demon that’s been pursuing him.

Vanquishing it won’t be as simple as sharpening his demon-hunting sword. The clever creature is hiding inside his best friend’s head, and she has no idea of the havoc she’s been wreaking, especially with his body.

Beryl suspects Eban knows why she’s been waking up with no memory of where she’s been or what she’s done, but he’s not talking. But when she inevitably learns what he’s hiding—or rather, what’s hiding inside her—she wonders if her love for him is real, or an illusion created by the demon’s lust.

Eban is losing the battle to hold his rising desire in check. There may be only one way to extricate Beryl from the beast entangling her mind. Call upon his demon blood…and offer it as a sacrifice.

Product Warnings!
Contains a half-human, half-demon doctor who can heal anyone except himself, and a woman who’d blush if she could remember the sensuous torture she’s been inflicting on him. Could make you wonder if you should start listening to the voices in your head…

Eban Heckmaster dreamed of becoming tangled in a river of gold. Soft and silky upon entering, it turned deadly within moments. He couldn’t breathe as it filled his nose. It bound his wrists, his ankles, blocked his vision. So much and so warm, sweat broke out across his body.

And he was fine with that.

Anything was better than living with the knowledge that his brother had taken the woman Eban loved as his bride hours ago.

Eban’s lungs ached for breath and his eyes shot open. Startled by weight settling on his abdomen, he tried to sit up, but two small hands held him down. Thanks to his demon blood, it only took a moment to adjust to the dark. In the nonexistent light, he peered up at Beryl Brookshier’s angelic face. She gave him a wicked smile as long strands of wheat-blonde hair tickled his bare chest. He sucked in a breath when he realized she was naked and a sheet was the only thing separating her from his raging erection.

“What are you doing?”

The second the words were out of his mouth, Eban knew he wasn’t talking to Beryl.

The demon used Beryl’s voice and body, but the thing talking to him was far from human. The notion of taking its head off and sparing himself a lot of trouble was tempting. If not for the real Beryl’s trusting green eyes and bashful smile.

“That stopped being funny the first time you got naked in front of me.”

She caressed his cheek. “You were dreaming. I was trying to make your dreams more pleasant.”

He slapped her hands away. “You thought you’d tempt me into bedding you and then letting some other parasite into my brain. That’s not going to happen, Rosemar.”

“You want this body. Why deny it, Heckmaster?” The lust demon glowered at him, her irritation creasing the smooth face she borrowed.

“Get off me.” He pushed her away, then grabbed the sheet as she slid off his chest. “What I want is for you to vacate it, leaving Beryl’s mind intact so I can get out of Berner.”

Her pique faded, replaced by a sultry smile. “We’ve lain awake at night imagining the coupling. This body twined around yours, the friction of skin on skin. Hard muscles meeting soft curves. Lips touching…lips.” Her green eyes brightened mischievously. “Miss Brookshier has quite an imagination.”

He tensed, flushing at her descriptions, but revulsion held his desire at bay. “She’s there with you, right now?”

Rosemar waved a hand. “She’s locked away, but she’s not as innocent as you seem to think. This body is familiar with masculine touch.”

Eban suppressed a groan. “It’s none of my business. Nothing I’m interested in exploring.”

“Your body suggests otherwise. A simple sexual escapade isn’t a lifetime commitment.” She twisted a strand of hair around her finger, pouting while she batted her eyelashes.

“It is where demons are concerned. You can’t stay in there forever, you know.” He sat against the headboard, trying to ignore the way she pressed her breasts forward.

“Can’t I?” The wicked grin returned. “You can’t get rid of me without killing her. You know that.”

Anger sparked in Rosemar’s eyes, sharper and meaner than human emotion. “I don’t know why you care. She doesn’t mean anything to you.”

Pain stabbed Eban’s chest. He turned his face away, trying not to think about Rhia’s hazel eyes, her soft Virginia accent, or the way she laughed when he said something funny. Beryl was an attractive woman now that she was beginning to gain weight after her long illness, but she wasn’t the one he loved.

“I’m not going to let you kill an innocent woman by wearing her body down to nothing.” He glowered, but nothing seemed to frighten Rosemar. Even Wystan, who’d beheaded his share of parasite demons, had no effect on this one.

“I was talking about Rhia.” She put a warm hand on Eban’s shoulder. “Seere orchestrated their meeting so the three of you could defeat Noem. Without Rhia and Wystan, there is no Berner. There’s no Heckmasters. No future.”

Eban shrugged her hand off. He closed his eyes, sifting through memories of the battle with Noem and his legion of lesser demons. Years ago, Eban had tried to make a normal life for himself in another city while getting his doctor’s degree, but his younger brother Tell had called him back to treat a vicious wound Wystan had obtained at Noem’s hand. Tell and a weather deity had run Noem out of town that time. Eban had stayed, putting his dreams away. They’d been guarding a sealed portal to Hell for as long as he could remember, but Astaroth, the reigning prince, constantly sent his minions through gaps in the seals, offering them great rewards for bringing the Heckmasters back. Their father’s redemption had doomed the three of them to remain in this cursed town forever, fighting monsters until they died.

Then when it seemed like Rhia Duke would give Eban the chance to escape, she went and fell in love with his boneheaded brother. Worse than that, she’d unwittingly allowed Noem to drive her right into Berner, where he planned to capture her and give her to Astaroth. In the fight, Wystan had been gored by a minotaur, but he’d used his demon blood to overcome death and save the day—with Seere’s help, because the normally neutral Gray Side couldn’t keep their noses out of Heckmaster business.

Rosemar claimed she was inhabiting Beryl’s body at Seere’s command, and she’d proven herself useful in a fight, but none of the Heckmasters trusted her. It was clear that no matter what her orders, she had her own motives for choosing Beryl as a host.

Angry when he should be grateful—he didn’t really want Wys dead—Eban balled the sheet in his fists. “I doubt Wystan and Rhia would be too happy to know Seere thinks he’s God now.”

Rosemar chuckled. “We all aspire to godliness, don’t we? You by playing doctor, me by manipulating feelings. That’s what makes us so perfect for each other.”

She ran her finger over her lips and rose, swaying her hips in an exaggerated manner as she left. Eban swallowed hard.

He’d always known demons would be the death of him, but he’d never imagined it would be at the hands of one who looked like Beryl.

A love of reading inspired Allison Merritt to pursue her dream of becoming an author who writes historical, paranormal and fantasy romances, often combining the sub-genres. She lives in a small town in the Ozark Mountains with her husband and dogs. When she's not writing or reading, she hikes in national parks and conservation areas.

Allison graduated from College of the Ozarks in Point Lookout, Missouri with a B.A. in mass communications that's gathering dust after it was determined that she's better at writing fluff than hard news.