A Menage Even My Mother Could Love? Guest Post by Rosanna Leo

August 31, 2015
Rosanna Leo is one of my very favorite authors and I am so excited to welcome her back to the blog today with a funny--and very relatable!--post to celebrate the release of her sexy new menage romance, Predator's Trinity. I already have my copy on my Nook ready to go! Rawr! Take it away, Rosanna!

Thanks so much to Jessica for hosting me on my blog tour for Predator’s Trinity, Gemini Island Shifters 6.
This is my first menage romance, and I must admit, as proud as I am of my genre and stories, a part of me wondered how this book would be received. Especially by my mother.

Oh, come on, fellow romance authors. You know what I’m talking about. When you write risqué books, don’t you sometimes wonder what will happen when your co-workers or boss or Aunt Mildred get their hands on a copy? I know I do.

I have every faith in my readers. They’ve proven themselves to be open-minded and curious…and full of good taste. ;)

But my mom? What on earth will she say when she figures out my heroine Suzan is pleasured thoroughly and often by, not one, but two sexy jaguar shifter heroes?

After all, my mother is the lady who usually tells her friends, “My daughter writes smutty books!” And she says this with great glee and only a faint blush. She freely admits she reads my work but skims the sexy parts. Am I okay with this? Of course. I’m impressed she reads them at all.

And it’s not just about the sex. For me, it never was. It’s always about the story. The sex is just a lip-smacking, toe-curling bonus with whipped cream on top. No, really. You might very well find whipped cream in there somewhere…

So do I think Mom will crack open Predator’s Trinity? Yes, I do. Will she skim the lovemaking between the triad of main characters? Hell, yeah, I think she might. Will her opinion of me change?

No, but she might very well tell her friends, “My daughter writes smutty books…but she doesn’t write from experience!” 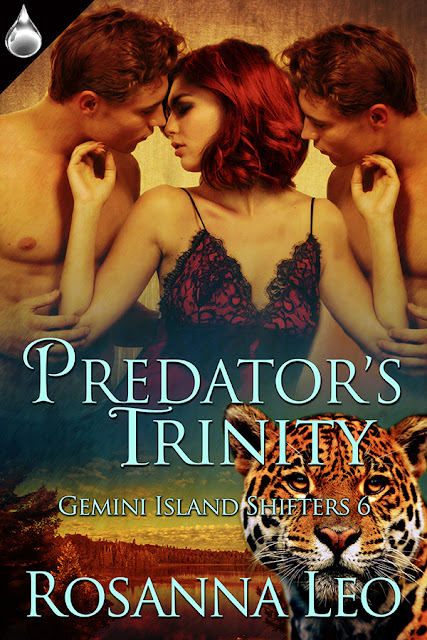 Librarian Suzan Marsh is an empath and has always felt assaulted by the feelings of others. She has had to distance herself from the people in her life, raising a mental barrier to ward off unwanted emotions. When wolf shifter August Crane abducts her, he breaks through the walls she constructed, forcing her to accept a frightening new truth.

When Crane drags Suzan into his cult and decides to make her his “concubine,” Percy and Byron know they must save the human woman. Their connection to her is strong and they cannot deny the dream they always held close. That they could share a woman and make her their mate.

But even after rescuing Suzan, none of them are free from Crane’s clutches. The wolf shifter has plans, ones that involve the demise of every shape shifter at the Ursa Resort. Not only must Percy and Byron keep Suzan safe, they must convince her to accept them both. In order to stop Crane from hurting everyone they love, they must learn to fight together.

After her shower, she toweled off and dressed in the clothes provided, choosing a pretty green V-neck T-shirt to accompany the jeans. Everything fit perfectly, from underwear to outerwear, as if the Moons had already known her. It boggled her mind, but she couldn’t lose the sensation they were connected by more than just circumstance. Her instincts never lied. After slipping into a pair of soft white socks, she made her way toward the kitchen.

She heard Byron and Percy before she saw them and stopped to catch an excited breath. When she heard what they said, she paused a moment longer.

“How’s your jaguar holding up?” Byron asked his brother.

She knew it was Byron. Despite them being identical twins, there were slight differences in their voices. Byron’s was the smoother voice. Percy’s had the odd touch of sexy gravel.

“My dumb cat,” replied Percy on a near growl, “was up all night long. He keeps pawing at me, trying to get to her.”

Her? As the burn of jealousy sizzled in Suzan’s gut, she gnawed on her bottom lip in a futile attempt to quell it. Maybe Percy had a girlfriend and he was dying to see her. Maybe he couldn’t wait to escape the cabin so he could meet up with this woman and, well, let his jaguar loose.

“Yeah,” Byron said. “My cat’s in agony, too. I think my ribs are black and blue inside, it pounds them so much.”

Oh, great. She wasn’t sure why this information astounded her. Of course men like them would have girlfriends. Hell, they might have mates. She hadn’t bothered to ask, had she? She’d already heard the mate bond was a powerful thing, that it would drive any shifter to distraction, both sexually and emotionally. Why had she been naïve enough to think these men might be single? She knew enough to know the good ones were always taken.

She’d been so stupid to think they had a bond. Bullshit. Clearly, her empathic tendencies had let her down for the first time.

Oh. Last she heard, she was the only Suzi around here.

Byron grunted. “I feel the same way. I’ve never felt like this. My head’s not working properly. Fuck, I couldn’t even hold a bowl of eggs without losing it. Percy, we need to discuss things. Seriously.”

“If Suzi is the one we’re meant to share, we can’t afford to make any wrong moves, especially with Crane in the picture. We need to support her and not let our egos get in the way.”

If Suzi is the one we’re meant to share… 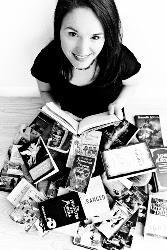 A library employee by day, she is honored to be a member of the league of naughty librarians who also happen to write romance. Rosanna blogs at www.rosannaleoauthor.wordpress.com