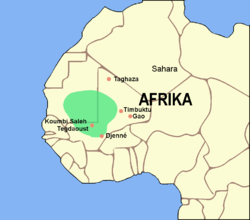 When most people hear the term Medieval, they think King Arthur, Lady Guinevere, and the Medieval Times Restaurant. But did you know the Medieval period simply refers to a time in history that lasted from the 5th to 15th centuries? Rise of a Queen, my new Medieval African historical romance, highlights the glorious Kingdom of Ghana in the 11th century.

Many people aren’t aware of much of Africa’s history outside of the Transatlantic Slave Trade, which began in the mid-1400s.  Sure, we’ve gotten glimpses into Africa’s past through such popular movies as Tarzan, and The African Queen—where the natives are running wild and naked. Because many times Hollywood is more focused on entertainment than accuracy, we rarely get to see historically accurate depictions of ancient African civilizations.

While researching for another historical novel I was writing about the Moors (North Africans who conquered Spain in 740 AD), I came across a documentary about Timbuktu. I’d always thought Timbuktu was an imaginary place until I saw this. The more I read, the more captivated I became. I learned it was a city that rose to prominence in 12th century. It was a center of great wealth and learning, visited by scholars and explorers from all over the world. Eventually, Timbuktu was annexed by the powerful Mali Empire, known for its glorious wealth and military might. Then, Mali was eventually taken over by the Songhay Empire. But before Mali and Songhay, the Kingdom of Ghana ruled (not to be confused with the modern country of Ghana).

These three ancient civilizations fascinated me so much I stopped working on my Moorish romance and started working on a romance with West Africa as the backdrop. I consider myself a huge history buff, but the fact that I’d never heard of these empires blew my mind! Let me give you a few facts about the ancient Kingdom of Ghana.

·        It existed between 300 AD and 1200 AD.
·        Its capital city of Koumbi Saleh on the rim of the Sahara desert was split into two distinct areas (one for Africans, and the other for Muslims and Arabs).
·        Its mighty military consisted of over 200,000 soldiers. The king charged a protection fee for traders traveling in caravans carrying salt from the north and gold from the south (gold was so abundant that salt was more valuable than gold back then).
·        Its government was a monarchy made up of a very wealthy king and rich vassals who paid tribute to him. (Ghanians had a complex system of government with governors, a court system, and advisory boards of elders).
·        The main methods of transportation were camels and horses.
·        Due to the hot weather, ordinary citizens wore very little clothing (animal skins and clothing woven from grass). Royalty wore linen, silk, and Kente cloth.
·        The Niger River ran through ancient Ghana, providing water for bathing and washing. The river offered plenty of fish and waterfowl to eat. The people also grew sweet potatoes and other vegetables.
·        Most of the people living in the empire were farmers, but they didn't own the land. Each family was allotted a portion of the land by the local village leader. The others were blacksmiths, woodcarvers, leatherworkers, entertainers, servants, and slaves.
·        There was constant fighting and warring from rival clans and outsiders who coveted the Kingdom of Ghana’s enormous wealth.

A Moorish nobleman living in Spain by the name of Al-Bakri questioned merchants who visited the empire in the 11th century and wrote that the king:

“…sits in audience or to hear grievances against officials in a domed pavilion around which stand ten horses covered with gold-embroidered materials. Behind the king stand ten pages holding shields and swords decorated with gold, and on his right are the sons of the kings of his country wearing splendid garments and their hair plaited with gold. The governor of the city sits on the ground before the king and around him are ministers seated likewise. At the door of the pavilion are dogs of excellent pedigree that hardly ever leave the place where the king is, guarding him. Around their necks they wear collars of gold and silver studded with a number of balls of the same metals.”

If you’re interested in learning more about this sprawling empire, look for my historical romance, Rise of a Queen. In the back, you’ll find an Author’s Note that offers in-depth details about the Kingdom of Ghana. 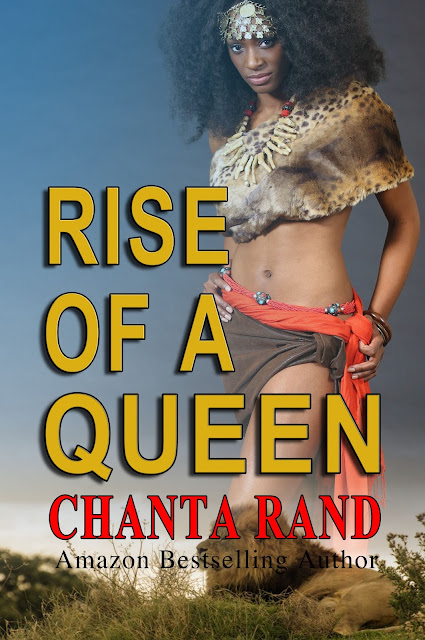 A dead husband. An unconsummated marriage. She needs an heir. Any man will do.

1061 AD. A sprawling empire rich in gold, resources, and military might dominates West Africa. It’s The Kingdom of Ghana, and it’s at the height of its power.

Twenty-year old Nabeela is grappling with her own power struggle. In order to save her younger sister from their step-brother’s clutches, Nabeela agrees to marry a repulsive African prince and bear him an heir. However, her plans are waylaid when tragedy strikes on her wedding night—her new husband dies—without consummating their marriage.

She must find a replacement to impregnate her immediately. Any man will do—including a drunken soldier her servants find naked taking a bath in a neighboring village. Nabeela holds him captive and coerces him into having sex with her—stealing the one thing he can never get back—his seed.

What she doesn’t know is the soldier is Rafan, Commander of a warring tribe’s royal army, and one of her family’s arch enemies. Eager for revenge, Rafan tracks her down once he’s released. But when these two reunite, they realize their lust for each other is far greater than their disdain.

Enamored by Nabeela’s beauty and bravery, Rafan makes her an offer of marriage, and the promise to help her become queen. He convinces her that they are stronger allies than enemies. Even though they share a commitment to unite, there are others who are determined to destroy them and their plans, including the one person Nabeela would have never suspected. In the end, she’s is forced to choose between her passion and her ambition.

Chanta Jefferson Rand is an Emma Award winning Debut Author of the Year, a multi-published, best-selling author of sizzling-hot romance, and the former host of The Chanta Rand Show. An avid reader of all genres, she stepped onto the scene in 2010 with her first published historical romance, Pharaoh's Desire.

Chanta is a history junkie, a Walking Dead fan, and a recovering shoe addict. She never met a stiletto she didn't like! If you still want more, check her out at www.ChantaRand.com or email her at Chanta@chantarand.com.