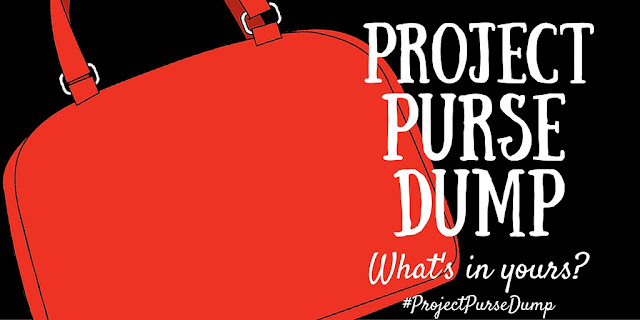 First off, I don’t carry a purse. I’ve got too much to haul around and generally if I’m not at an art gig, I carry beer money in my pocket, which is all I really need. I know I live in Georgia and most girls add a touch of lipstick before heading to the Piggly Wiggly or the Tru-Buy, but I’m not most girls. I might have a few smudges of oil or acrylics on my person anyway, so why dress that up with lipstick?

My name is Cherry Tucker and I live in Halo, Georgia. I like to think of myself as ten times tougher than I look. My height, blonde hair, and cornflower blue eyes don’t help me none. I’m a portrait artist, so where I’m not paying attention to how I look (except for my clothes, I do love to create my own outfits), I am paying attention to how you look. For example, what color would I mix to capture your eyes or what the contrast of light is doing to the angles of your cheekbones. And if you’re a guy, I’ll check out your muscle definition, if you have any. Purely for professional reasons, of course. 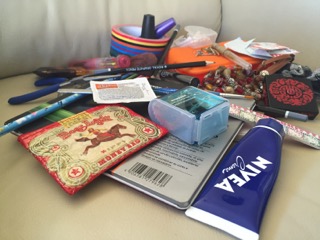 That’s why you can see I always carry a sketch book and pencils. And brushes. Sometimes paint, but generally I keep that in my tackle box. Measuring tape’s always handy. Duct tape, too. I’ve been hog tied and duct taped (don’t ask), so I like to carry my own. And they’ve got some colorful ones, now.

Band Aids and Motrin. More necessities of my lifestyle. Particularly if you do get hog tied and duct taped.

And if I do need to clean up, I’m ready with the lipstick and some jewelry. I’ve got a bullet ring and pistol earrings that are good for any occasion. Nail polish comes in handy for all sorts of things. For example, if you drive a rusty, old truck, when you see a new spot, just dab it with some polish. Works wonders for holding the truck together and you can fix your nails real quick, too.

Thanks for your interest! This was a great chance to clean out my bag. I found a lot of empty shot gun shells. Don’t know why I’ve been carrying them around, but now I’m thinking they could make Christmas ornaments. 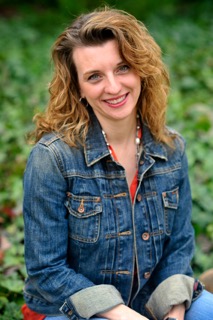 A 2015 Georgia Author of the Year Best Mystery finalist, Larissa Reinhart writes the Cherry Tucker Mystery series. The first in the series, PORTRAIT OF A DEAD GUY (2012), is a 2012 Daphne du Maurier finalist, 2012 The Emily finalist, and 2011 Dixie Kane Memorial winner. The fifth mystery, THE BODY IN THE LANDSCAPE, releases December 2015. Her family and Cairn Terrier, Biscuit, now live in Nagoya, Japan, but still call Georgia home.

The fifth book in the Cherry Tucker Mystery series, The Body in the Landscape, is available for preorder now. You can find Cherry Tucker here: Amazon, Barnes & Noble, Kobo, iBooks, and anywhere else, if you just ask.