Sexuality and Its Impact on History: The British Stripped Bare. Preview and Giveaway!

I am thrilled beyond belief to announce that our new history book, Sexuality and Its Impact on History: The British Stripped Bare is available to pre-order. Hurray! This is an amazing project with some truly remarkable authors involved and I am honored to be a part of it.

My chapter is about the ritual and reality of love in the Middle Ages--big surprise! ;) I'm tackling sex outside of marriage, marriage, the church's views on marriage and ways to get out of it, contraception (yes, it existed and I'm giving you a recipe you should under no circumstances ever try at home!), sex magic, transgender folks, prostitution, concubines, and homosexual relationships (including a king, some knights, and a whole lotta nuns). That's a lot to fit into one chapter, but I love you, so I did it.

If that's not enough to tempt you, take a look at the chapter breakdown below. We have Lady Godiva, Anglo Saxons, Tudors, Anne Boleyn, Mary Queen of Scots, and Victorian prostitution--what more could you want?

Sexuality and Its Impact on History is available for pre-order now. Order it online, ask your local book store to stock it, and scroll down to enter our amazing giveaway. There are eight--count 'em, eight--copies of the book up for grabs and the grand prize comes with a $50 Amazon gift card.

Tell your friends and mark your calendars for March 30th!

If you can't wait until them, here are a couple of related articles I wrote on the subject for Dirty, Sexy History:

Sex, Contraception, and Abortion in Medieval England
The Joy of Confessing: "Women's Vices" and Burchard's Decretum of 1003

There's a lot more on this in the book, so if you enjoy, make sure to pre-order and enter our giveaway below.

Sexuality and Its Impact on History: The British Stripped Bare

Learn of the scandals and romance that shaped Great Britain. This provocative collection of essays depicts the cultural and societal kinks of the British, from the Anglo-Saxons, Medieval, Tudor, Regency, and Victorian eras.

Discover the ménage that changed the course of the Anglo-Saxon throne, go undercover to explore Courtly Love, learn about the business of Tudor and Regency marriages. Read of a possible dalliance involving Queen Anne Boleyn, and the controversial marriages of Mary, Queen of Scots. Peek into the bedrooms of Victorian prostitutes.

Each story provides shocking detail about what was at the heart of romance throughout British history.

Would you swig a magic potion or plot to kill your husband in order to marry your lover? These are just two of the many romantic and sexual customs from British history that you will explore when eight authors take us through the centuries, revealing that truth is stranger than fiction when it comes to love. From bizarre trivia about courtly love, to techniques and prostitution, you’ll encounter memorable nuggets of provocative info that you’ll want to share with friends and co-workers.

It’s all here: Lady Godiva and Peeping Tom, ménage a trois, chastity belts, Tudor fallacies, royal love and infidelity, marriage contracts (which were more like business arrangements), and brothels, kept women, and whorehouses. Take a peek at what really happened between the sheets. Each story provides you with shocking detail about what was at the heart of romance throughout British history.

Sexuality and Its Impact on History: The British Stripped Bare chronicles the pleasures and perils of the flesh, sharing secrets from the days of the Anglo-Saxons, medieval courtly love traditions, diabolical Tudor escapades—including those of Anne Boleyn and Mary Queen of Scots—the Regency, and down to the ‘prudish’ Victorian Era. This scholarly yet accessible study brings to light the myriad varieties of British sexual mores. Published by Pen & Sword Books, U.K.

Rioting in the Harlot’s Embrace: Matrimony & Sanctimony in Anglo-Saxon England by Annie Whitehead

The Art of Courtly Love: The Ideal and Practice of Love in the Middle Ages by Jessica Cale

These Bloody Days: The Relationship between Anne Boleyn & Thomas Wyatt by Judith Arnopp

The Marriages of Mary Queen of Scots by Gayle Hulme

Succession, Confusion and Ramifications: Who Should Wear the Crown? by Dr. Beth Lynne

Lips of Flame & Heart of Stone: The Impact of Prostitution in Victorian Britain and its Global Influence by Hunter S. Jones 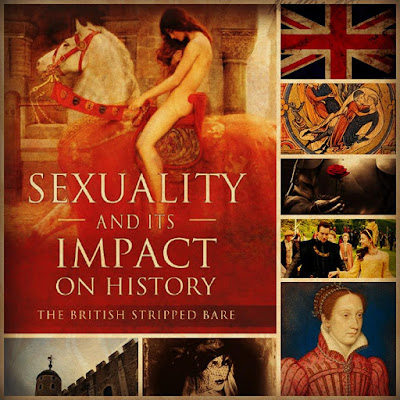